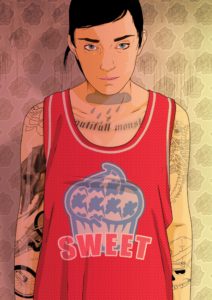 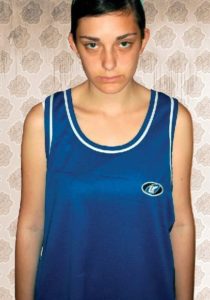 Spanish artist Daniel Caballero explains how he creates his vector artworks from photo references in Photoshop. He details how he combines elements from different sources, and adds in graphic elements to create a detailed illustration, including tattoos, clothing, shadows and lighting. Sometimes it’s in Spanish:)

Complete this tutorial then complete again using a portrait of your own vector portrait. Logo’s and tattoo’s – optional.

Load your own portrait into a post on your web site.

Create a new A4 portrait document in Photoshop, and then from the project files place Background.jpg. Next, place Photo.png over it as shown. 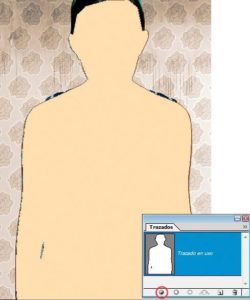 We’ll build up the portrait by creating blocks of skin, then adding in linework, clothing and the details. First, create a new layer (Cmd/Ctrl + Shift + N) in the Layers panel and call it ‘Skin’.Select a colour for the skin – here I used #FAE0AF. With the Pen tool (P), create a vector outline around the body´s contour. Don’t include any clothing or hair that extends beyond the shape of the body, they will be covered with others layers lately.Next, fill the shape with the skin colour. Open the Paths panel (Trazedos in Spanish) and click on the Fill path with the foreground colour button at the bottom. Hide this layer, so we can use the photo to create the linework.

Create a new layer, called ‘Skin Lines’. Select a dark brown colour, and a brush with a 3px radius. We can use the path created for the ‘Skin’ layer to create line work around the whole body and face. In the Paths panel, click on Stroke path with brush.Use the Pen tool and the Stroke path with brush command to create the lips, nose, eyes, jawline, eyebrows and any other clearly defined features. To create thinner lines, simply lower the radius of your brush before using the command. Use an Eraser with a hard brush to fix any untidy line shapes. 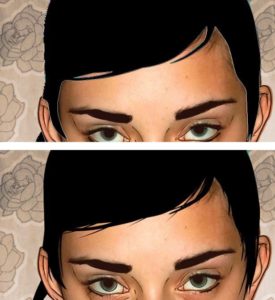 Next, use the Pen tool to mark out the outline of the hair and fill it with black. Use a thin brush to add fine hairs. 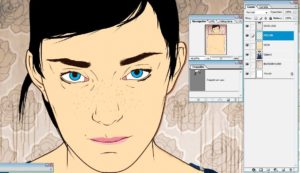 Below the ‘Skin Line’ layer, create a new layer. On this paint in eyes and lips, and draw some freckles using a brush with a lower opacity. 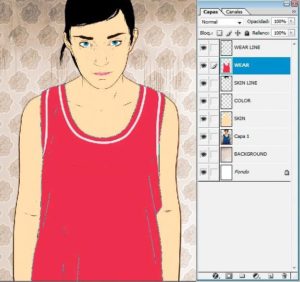 Create a new layer for the T-shirt at the top of the layer stack, called ‘Wear’.Repeat the process we used for the body in Step 2. Create a pink shape for the T-shirt (I used: #E31F40) and then apply the Pen tool for the outline to create another layer called ‘Wear Line’.Use the Pen Tool and the Stroke path with brush command to add the white piping. On a new layer, again use this process – but using a black colour this time – to make the overall outline and add some wrinkles. Use the Eraser to stylize them. 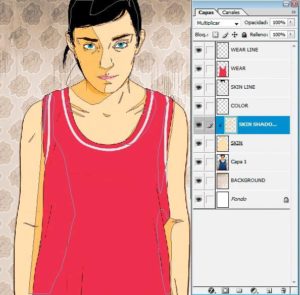 Click on the ‘Skin’ layer. Create a new layer using Cmd/Ctrl + Shift + N, and select Using Previous Layer to Create Clipping Mask. Call this layer ‘Skin Shadow’ and Change its blending mode to Multiply. This layer will only affect the body, so it’s perfect to quickly create shadows.Select the same colour as the skin and paint shadow shapes on the body. You can either match the lighting in your photography or pick a light source of your own (as long as you remember to stick to it for later steps). I’m working with the light coming in from the right. 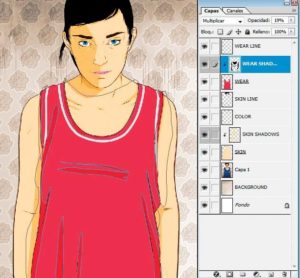 Click on the ‘Wear’ layer and repeat Step 7 to add black shadows, creating a new layer called ‘Wear Shadow’. Mine looked a bit harsh, so I dropped the opacity to 18%. 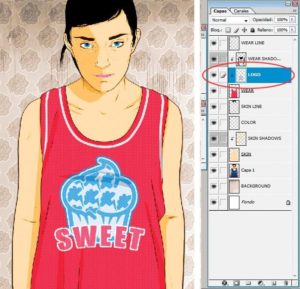 Select this link to open Logo.png. Copy and paste it into the illustration, then drag it below the ‘Wear Shadows’ layer. It will automatically be given a clipping mask that constrains it within the outline of the ‘Wear’ layer.I’ve used a cupcake here for no other reason than I like to use them in my illustrations. If you don’t feel the same way, feel free to use anything that works as the T-shirt´s logo. 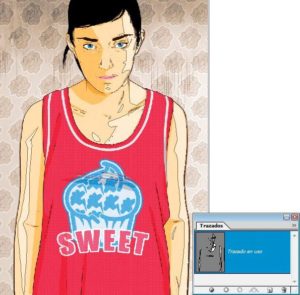 Above the ‘Wear Line’ layer, create a new layer for the skin highlights. Apply the white Pen tool to draw filled shapes of the brightest parts of the body and the T-shirt, using the lighting in the original photo or the light source your opted for earlier as a guide. Give this layer an opacity of 40%. 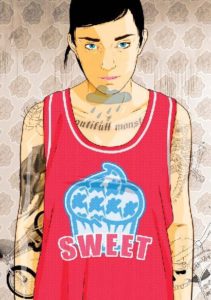 Bring in the Tattoos.png by selecting this link and place it just above the ‘Wear’ layer. Change the blending mode to Multiply, so it will darken your image with the shapes of the tattoos. Use a hard Eraser to delete any parts of the tattoos that sit outside the body. 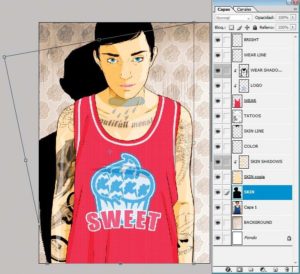 Click on the ‘Body’ layer’s thumbnail and hit Cmd/Ctrl + J to duplicate it. Select the lower layer. Use a Hue/Saturation adjustment (Cmd + U) to darken it to black and create a shadow. Press OK.Select Edit > Transform > Distort. Drag the top-left corner to give it perspective. Hit Return. Then go to Filter > Blur > Gaussian Blur, with the blur radius at 35 pixels. Give the layer an opacity of 20%. 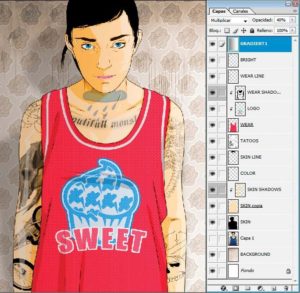 At the top of the layer stack, create a new one with an opacity of 40%, and use Gradient tool (G) to make a soft black-to-white gradient that runs along the direction of your lighting (so black-to-white from left to right in my image). This will give a more natural sense of lighting. 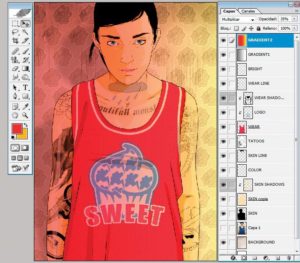 Above the black-to-white gradient, create a new layer with a gradient from red to yellow and give it an opacity of 35%. This will give a warmer atmosphere to the illustration. 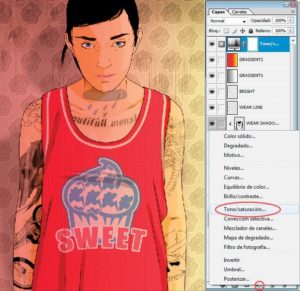 Select the Create new fill or adjustment layer button in the Layer panel and select Hue/Saturation. Lower the Saturation to -18%.

About the artist: Daniel Caballero

Daniel Caballero – aka Freaking Lovely – has been passionate about comics and illustration since he was a kid. He specializes in vectors, trying to find a point between beauty and darkness in his illustrations.