Inspired by the stories related through Ojibwe pictographs, we will write our own stories (using fantastic binomials), create a series of images which will be simplified into symbols. These symbols will be used to create our own pictograph in a clay slab. Carving into the clay and monochromatic glaze will clarify the symbols and story. In addition students will create a clay sphere – a rattle – that will be covered with repeated symbols from the story. Traditional burnishing will finish the rattle. Students are required to make one pictograph and one rattle. http://www.artsconnected.org/artsnetmn/identity/talking_rocks/olslesson.html 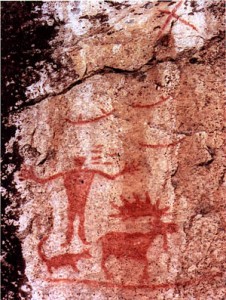 the arrangement of figures at the main panel of the North Hegman Lake, Minnesota (near Nett Lake) rock art site appears to have been carefully composed at one time by one rock artist. Its present excellent condition suggests either that it may not be especially old or that it is a site where an older pictograph has been repainted.

The rock art appears to represent Ojibwe meridian constellations visible in winter during the early evening, knowledge of which may have been useful for navigating in the deep woods during the winter hunting season. Support for a suggested multi-layered interpretive model comes from a review of various culturally specific ethnohistorical sources. The inclusion of elements from widely known Ojibwe legends and references to constellations with cosmological or religious significance make it an intriguing scene with many interesting culturally specific referents. This panel is perhaps the most visited and photogenic pictograph within the State of Minnesota and it possesses remarkable artistic merit. Carl Gawboy, an Anishinaabe artist from the Bois Forte Reservation and Associate Professor of Indian Studies at the College of St. Scholastica, whose father was a Nett Lake Ojibwe, was the first person to propose that the meaning of the panel was linked to a series of Ojibwe constellations in the sky.

In a newspaper article in the Duluth News-Tribune (April 6, 1992) entitled “Ely Pictographs Linked to the Heavens” Gawboy suggested that the man with the outstretched arms is the Ojibwe version of a constellation in the area that we think of today as the constellation Orion. This figure is the Winter-maker and Gawboy suggested that the position of the pictographs on the cliff is oriented towards viewing the constellations in the winter sky. Gawboy also recognized later that the canoes are probably paddlers on the Path of Souls or Milky Way. German ethnographer, Johann Georg Kohl, wrote that “the Indians [call] the milky way ‘the path of the dead,’ or the ‘path of the souls.’ Among the Ojibwe, the milky way is called ‘Jibekana,’ which word has that meaning” (Kohl 1985::213).

In The Island of the Blessed; or the Hunter’s Dream (Schoolcraft 1851:pp.321-3) Schoolcraft described an Ojibwe hunter’s dream of paddling canoes of white shining stone with shining paddles on the path of souls to get to heaven with his beautiful girlfriend. When the hunter awoke “he was still in the bitter land of snows and hunger, death and tears” (p.323). I agree with Carl Gawboy’s early insight that this appears to be a star chart of Ojibwe constellations, with Winter-maker the near equivalent of Orion, and the Three Canoes as paddlers along the Path of Souls. Unlike Gawboy’s early reconstructions, I suspect that the Dog (or Wolf ) constellation and the Moose constellation shown in the panel were most likely composed of stars directly below Orion. In my view the best fit for the Ojibwe Dog or Wolf constellation is the combination of the modern Canis Major (large dog) and Columba constellations, the Moose constellation is a combination of the modern Eridanus, Caelum, and Fornax constellations and the passengers in the Three Canoes are bright first magnitude stars in the constellations Gemini, Auriga, and Taurus. The panel is remarkably accurate as a representation of the positions of the stars and constellations relative to each other in the winter night sky. Its accuracy would be sufficient for it to be used today for navigation through the deep woods in winter without a compass. The same kind of care and detailed attention that this rock artist put into accurately drawing all of the features of the bull moose (our word comes from the Ojibwe “mooz”), also apparently went into carefully laying out the correct positions of the surrounding figures. It could not have been easy to have drawn these figures on uneven granite using red ochre, and this does not appear to be the work of an unskilled or beginning artist. The way that the ground line was drawn at the bottom of the panel may also have been important. It deliberately slopes down a bit on the right where the rock artist apparently wanted to make sure to show that the feet of the wolf and the moose were slightly above the horizon. The artist was careful to include the dew claw or the rudimentary hind toe of the moose, which is also an important star grouping in the Ptolemaic constellation Eridanus. The star that is the dew claw used to mark the end point of the Ptolemaic constellation. This constellation however was revised in modern times to extend far below the horizon. The distance above the horizon of the dog‘s front paw and the height of the moose=s dew claw above the horizon are important because like a sextant in the sky, they could tell you the latitude and how far away you were from home e.g., if you were traveling south from Canada or north from Mille Lacs or Fond du Lac, Minnesota.   http://www.tc.umn.edu/~call0031/Hegman.html