Winters are long. Finding things to do that a specific to our area and climate I believe have longevity. Like most schools each winter the school puts on a Winter Homecoming at South Ridge has warmly included the Snow Snake competition as part of the school’s culture.  8th Grade art students study the history of art of making the snow snake and then make snow snakes for the school. Each grade chooses one of the art student’s snow snakes for competition.

Brief history of the snow snake:

Native Americans living in snowy locations created a traditional challenge game involving creating a snow snake, a specifically prepared stick out of wood, and throwing it down a prepared track. The snake that traveled the farthest after three tries would win. The game was played to pass long winter days as well as sharpen hunting skills. We can track it’s use by the Iroquois over 500 years ago to the Fur Trade period with Woodland Tribes in the mid 1800’s as well as modern times in the 2010 Arctic Winter Games in Grande Prairie Alberta Canada. It was used to hone spearing skills.

The track the snake runs down is made by piling up snow in a mound about 76 cm high (30 inches) gradually sloping to ground level by the end of the run. Some tracks run a mile in length! Typically the track is built on the day it is to be used. A log is used to make a smooth groove along the top center area for the snow snake to travel. The groove track needs to be kept as straight and even as possible.

Some snow snakes measure up to 1.83 meters long (6 feet) or more and as short as 1.21 meters (4 feet) called a mudcat. The shortest version is about 15 cm (6 inches in length) and is called a snow dart. Typically the wood is harvested and cured up to eight years to assure the snake doesn’t crack or curl in an undesired way. Oils and waxes prepare the snake to travel over the snow easily.

The team consists of three members – a Shiner, a Thrower and a Marker. The shiner prepares the snake for the weather conditions. The Thrower stands in a pitch hole, takes a running start and throws the snake on to the track. Either the Shiner or the Marker indicate on the track the distance the snake travels. Records have shown snakes have traveled up to 2.4 kilometers (one and a half miles). Markers will share responsibilities in checking for each other. The thrower’s style is personal and required finesse rather than power. Some groups built up jumps or barriers to break through when throwing snow snakes

Assignment 1:   Preparing the repeating motif – accurately use meters and centimeters in create a design to be used on a one meter long snow snake. On paper complete a 5 cm x 1 meter long grid and create the intended design. Use a consistent repeating motif measured in centimeters. This design will be burned into the top face of the snake using a wood burner. Additional color is optional.

Naming your Snow Snake – go to the Ojibwe People Dictionary and look up the words for snow. Choose a name for your snow snake. Wood burn your name and the snake’s name into the side of the snake. OJIBWE VOCABULARYOjibwe Dictionary 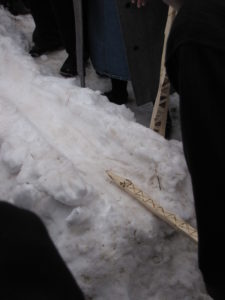 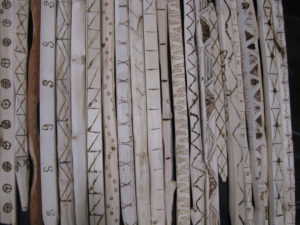 Assignment 2:  Carving the Snow Snake –  demonstrate an understanding of Newton’s Law’s of Motion by completing (carve and finish) a hand carved snow snake with a bottom sliding surface that is carved smooth, is finished with (wax or lacquer/sanded in progressively finer grit paper) and or oiled for optimum sliding ability demonstrating their understanding of resistance and kinetic friction.

Use a Swedish Mora carving knife. Sharpen as needed.

Participate in all safety lectures before carving.

Wood carving needs to be completed during 2-3 class periods.

Finishing and burning the repeating motif/names will be completed during 2-3 class periods.

Building and testing the track for the South Ridge Snow Days Snow Snake Competition will be done the last week of February. Team is yet to be determined. (2-3 class periods)

South Ridge students will compete in a snow snake competition during the school’s Snow Week – first week in March.

Grading on the snow snake i s based on work in the studio, controlled carving which provides even smooth surfaces/no knots or jagged edges, Ojibwe naming of snake, clean repeating motif burned in the top/good design, completed finishing of the bottom.