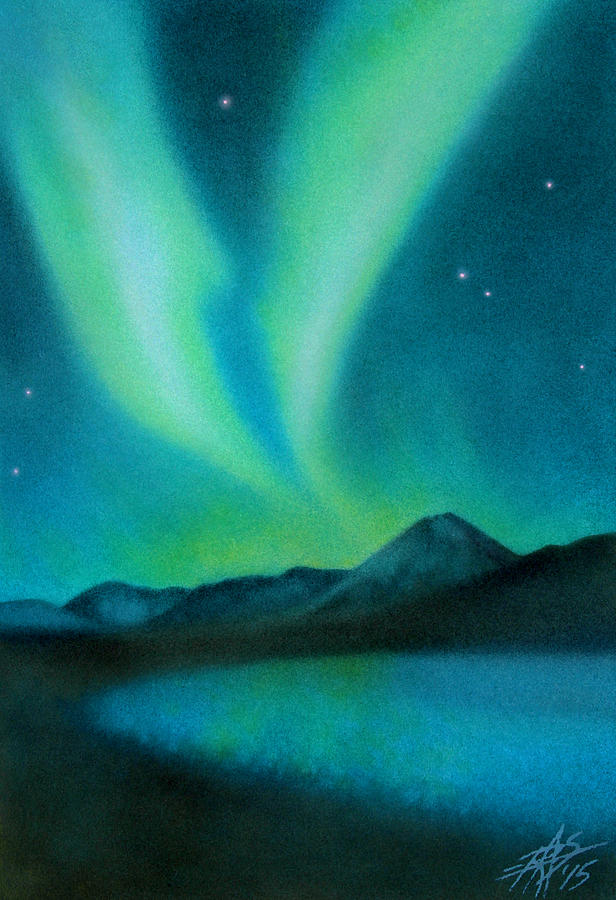 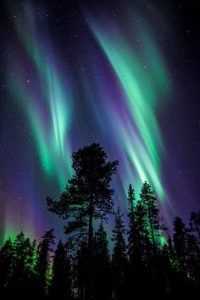 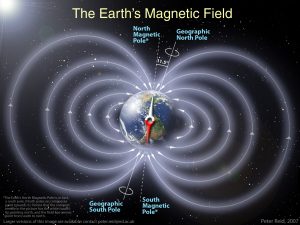 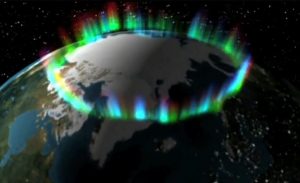 The northern lights or the aurora borealis are the result of electrons colliding with the upper reaches of Earth’s atmosphere. (Protons cause faint and diffuse aurora, usually not easily visible to the human eye.) The electrons are energized through acceleration processes in the downwind tail (night side) of the magnetosphere and at lower altitudes along auroral field lines. The accelerated electrons follow the magnetic field of Earth down to the Polar Regions where they collide with oxygen and nitrogen atoms and molecules in Earth’s upper atmosphere. In these collisions, the electrons transfer their energy to the atmosphere thus exciting the atoms and molecules to higher energy states. When they relax back down to lower energy states, they release their energy in the form of light. This is similar to how a neon light works. The aurora typically forms 80 to 500 km above Earth’s surface.

Earth’s magnetic field guides the electrons such that the aurora forms two ovals approximately centered at the magnetic poles. During major geomagnetic storms these ovals expand away from the poles such that aurora can be seen over most of the United States. Aurora comes in several different shapes. Often the auroral forms are made of many tall rays that look much like a curtain made of folds of cloth. During the evening, these rays can form arcs that stretch from horizon to horizon. Late in the evening, near midnight, the arcs often begin to twist and sway, just as if a wind were blowing on the curtains of light. At some point, the arcs may expand to fill the whole sky, moving rapidly and becoming very bright. This is the peak of what is called an auroral substorm.

Assignment: Choose an image of the aurora. Tape a large sheet of brown paper to a drawing board creating an even (1/2″) border all around. With an Ebony pencil complete a contour (line) drawing based on your photograph. Fill the page.

Demonstration by your Instructor of how to use the media.

Preparation – apply hand cream (provided) and thoroughly rub into hands. This will assure you are able, if needed, to get any oil paint off you skin easily with soap and water.

Day one: Using an Ebony pencil complete a line drawing based on the picture provided. Do not add details but clearly draw shapes in perspective. Using the oil paint sticks –  add color, mixing with your fingers as needed throughout. Completely cover the sheet in first session if possible – no black.

In second session, add color on top of what is already on the paper – building color and depth. Continue to mix and blend color with the oil stick partially (sometimes fully) dry to complete the painting. Add black to clarify and add 3 dimension.