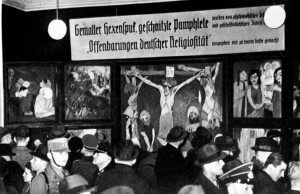 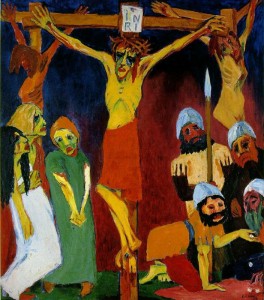 On July 19, 1937, the  “Degenerate Art” exhibition opened in the Hofgarten arcades of Munich’s Residenz. It included 650 works of art confiscated from 32 German museums. For the National Socialists, the term “degenerate” applied to any type of art that was incompatible with their ideology or propaganda. Whole movements were labeled as such, including Expressionism, Impressionism , Dada, New Objectivity, Surrealism, Cubism, and Fauvism, among others. Many of Germany’s most talented and innovative artists suffered official defamation: for example, George Grosz, Ernst Ludwig Kirchner, Max Ernst, Karl Schmidt-Rottluff, Max Pechstein, Paul Klee, and Ernst Barlach.

Avant-garde artists and museum directors who purchased or exhibited modern art had already been barred from professional activity as early as 1933. With this exhibition, the visual arts were forced into complete submission to censorship and National Socialist “coordination” [Gleichschaltung]. Initiated by Minster of Propaganda Joseph Goebbels and President of the Reich Chamber of the Visual Arts Adolf Ziegler (1892-1959), the exhibition traveled to twelve other cities from 1937 to 1941. In all, the show drew more than 3 million visitors. The exhibition sought to demonstrate the “degeneration” of artworks by placing them alongside drawings done by the mentally retarded and photographs of the physically handicapped. These comparisons aimed to highlight the “diseased,” “Jewish-Bolshevist,” and inferior character of these artworks and to warn of an impending “cultural decline.” As an exercise in contrast, the opposite – good, “healthy,” “German” art – could be seen in the “Great German Art Exhibition,” on view only a few meters away.

Watch and participate in a number of videos and class discussions about the art created during WWII, the Degenerate Art exhibition, and the art created in Europe during the 20th century.

1.As a class create a list of things that will be needed in your future for a good lie (i.e affordable health care, living wage, enough food, peaceful world, no war, loving family, etc.).

2. Using the portrait supplied to create a silhouette. Use a fine point sharpie.

Break the image into “student age” number of shapes by drawing straight lines. Within each shape complete a unique pattern of “doodles” / “symbols” – each shape about should represent a future goal. Create patterns within each image.No words or numbers within the silhouette.