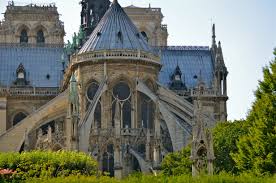 What do you see when you look up to the top of the great cathedral of Notre Dame? You see monsters, half-man and half-beast. These demon looking creatures carved out of stone are called gargoyles. They are one of the many eerie stone figures that adorn the gutters of the Cathedral of Notre Dame in Paris. Gargoyle comes from a Latin word, meaning gullet or drain. That’s what the strange looking creatures are, they’re drainpipes. Each grotesque figure has a passageway inside that carries rainwater from the roof and out through the gargoyle’s mouth. From the top of the cathedral’s towers the gargoyles have a magnificent view of the city. 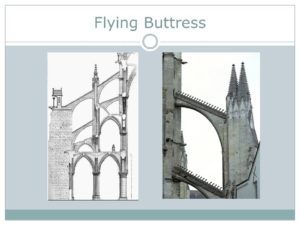 In architecture, a gargoyle is a carved or formed grotesque with a spout designed to convey water from a roof and away from the side of a building, thereby preventing rainwater from running down masonry walls and eroding the mortar between. Architects often used multiple gargoyles on buildings to divide the flow of rainwater off the roof to minimize the potential damage from a rainstorm. A trough is cut in the back of the gargoyle and rainwater typically exits through the open mouth. Gargoyles are usually an elongated fantastic animal because the length of the gargoyle determines how far water is thrown from the wall. When Gothic flying buttresses were used, aqueducts were sometimes cut into the buttress to divert water over the aisle walls. 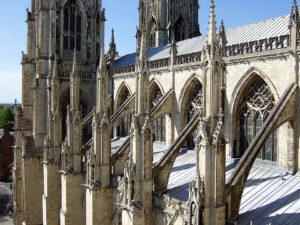 The history of Notre Dame:The Notre Dame in fact replaced a Roman Catholic Church, the Cathedral of St. Etienne, founded in 528 who occupied the same site. Some have claimed that there were actually two churches standing on the site, one dedicated to the Virgin, and the other dedicated to St. Stephen. Notre Dame is an old Catholic cathedral that stands on the Cite Island in the River located in the center of Paris. This cathedral is considered a Gothic perfection and is dedicated to the Virgin Mary. “Notre Dame” is the way the French say “Our Lady.” The building for this project began in 1163 during the reign of Louis VII. Pope Alexander III had the honor of laying the foundation stone. On completion of the choir in 1183 work was begun on the nave and completed about 1200.

Through the years many transformations have taken place such as the building of the towers, and the transept crossings. The interior of the great cathedral was transformed in the mid-13th century. Kings and Queens were once crowned in the magnificent temple and in the late 1700′s, during the French Revolution many treasures of the cathedral were destroyed or looted. The great bells managed to escape from being melted down and the inside of the church was used as a storehouse for food and other items.

After the Revolution passed the great church of Notre Dame needed much repair work done and a large restoration program was begun including the construction of the spire. In 1871, the cathedral was nearly burned by the Communards but it managed to survive. During the famed life span of Notre Dame, it has been the site of numerous official ceremonies including The Crown of Thorns placed in the cathedral in 1239 by St. Louis. The crowning of Henri VI of England, the crowning of Mary Stuart, Queen of France and the Emperor Napoleon when he seized the crown for himself and then for his Empress Josephine.

The conspicuous stone gargoyles have carried rain from the roof of the famous Cathedral of Notre Dame for move than six hundred years. Down through the years they allowed rainwater to fall free of the cathedral, thus preventing damage to the masonry. Some believing in superstition claim that the grotesque figures frighten away evil spirits along with serving its practical duty. After the introduction of the lead drain pipe in the 16th century the gargoyle’s notoriety faded out but they were still used as decorations. The old 19th century novel, “Notre-Dame De Paris” has inspired many movies to be made about the great Notre Dame Cathedral.

Assignment – Drawing  In the spirit of Notre Dame gargoyles draw a mask (side and front view) of a gargoyle based on an (assigned) fearsome animal of North America.
Assignment – Sculpture    Observe the demonstration on building a 3D clay slab mask. Build your under-form from newspaper. The head should be 12-15″ tall x 10-12″ wide x 4-6″ deep.  Carve the holes for eyes,mouth, nose, and ears. Add clay for additional relief details.  Cover the clay with plastic wrap to protect the clay.
Paper mache’ of the form: Cover the base form with three to four payers of paper mache’/newspaper. Once the base layer is completed begin adding details such as eye lids, eye balls, teeth, ears (and extensions from ears), etc. Let dry. Once dry remove from clay form covered in plastic and recycle the clay and throw away the newspaper and plastic wrap.
Assignment – Color   In your sketchbook draw your mask. Using neutral color the entire mask. To add contrast and details paint to clarify with bright color – adding to the gargoyles personality. Finish with black details.
Add a strong string to the mask-back for hanging on the wall. 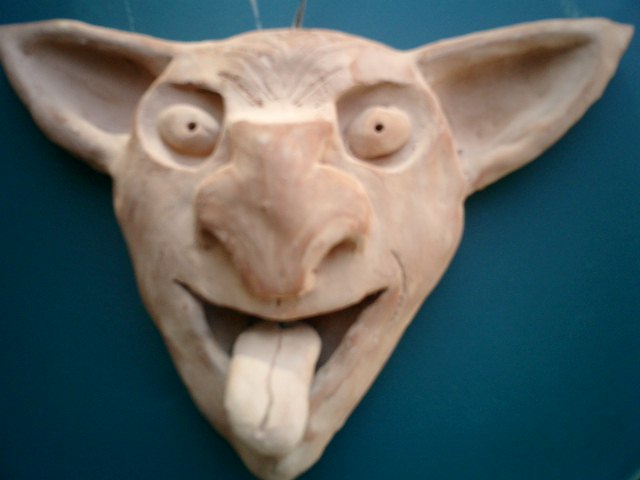 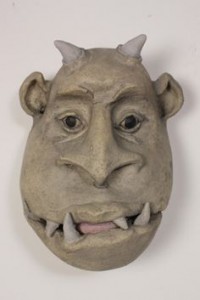 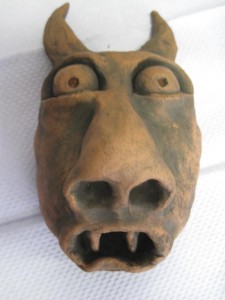