Kumihimo can be translated as ‘gathering of threads’ and the earliest Kumihimo in Japan is generally believed to date back to the Nara Period (645-784 AD). Braids were used for securing clothing and possibly also in religious ceremonies.

In the Heian period (784-1184) the braids became more complex and elaborate. Braids were still used in clothing, but with the growing dominance of Buddhism, braiding became more import through its use in the decoration of temples. Much of the braiding was done by monks.

A major departure from these uses came with the rise of the Samurai Warrior class which happened during the Kamakura (1185-1333 AD) and Muromachi (1333-1573 AD) periods. Samurai armour was made up of lacquered iron plates joined together with braids. As much as 250-300m of braid was required for a single suit of armour and in addition kumihimo braids were used for binding on swords, horse armour and horse harnesses. The braids were produced in a wide variety of designs and widths, with interesting details and textures.

It was in the Monoyama period (1573-1614) that kumihimo started to be used in Kimono wearing. With the introduction of the wide obi sash a braid was needed to hold it in place. This braid is called the obijime and it is still in use today.

During the Edo period (1616-1867) most of the traditional patterns were developed. The earliest published patterns date back to this period.

A serious decline in the production of kumihimo braids took place towards the end of the Meiji period (1867-1912) when samurai culture saw a decline and it was forbidden to wear armour. The popularity of the objime kept traditional braidmakers in business, but as the 20th century progressed they suffered through the introduction of braid making machines. Today 95% of obijime are made by machine.

Kumihimo in the 21st Century

Kumihimo can be learnt in Japan in a traditional school, such as Tokyo’s Domyo School. Instruction is given along traditional lines and students can expect to pay dearly for a very strict regime. The patterns and techniques used by the individual schools are often shrouded in secrecy.

One event made kumihimo accessible to everyone and that was the invention of the kumihimo foam disk by Makiko Tada. The disk is cheap, portable and very easy to use. It immediately became very popular with crafters around the world, who quickly found contemporary uses for the braid. With one simple, but clever invention the braids which had secured armour and adorned ancient temples found their way to the necks and wrists of 21st century women. 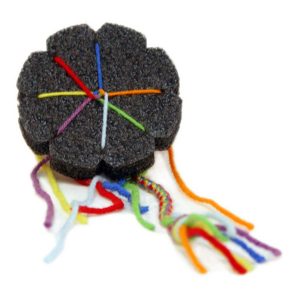 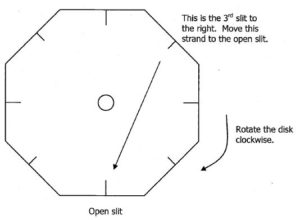 Assignment: Using 7 threads of pearl cotton (3 colors) watch the demonstration of how to complete the weaving. Create a woven rope long enough to be tied comfortably to your wrist or ankle.

We will watch “The Little Prince” while creating our woven rope.

The narrator introduces himself as a man who learned when he was a child that adults lack imagination and understanding. He is now a pilot who has crash-landed in a desert.

The main theme of The Little Prince is the importance of looking beneath the surface to find the real truth and meaning of a thing. It is the fox who teaches the Prince to see with one’s heart instead of just with one’s eyes.Unfortunately, most adults have difficulty doing this.